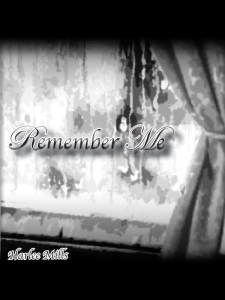 It has been said that the eyes are the windows to the soul, a clear portal to view the other side. Exposing the owners wants, needs, wishes, desires, and if allowed whatever secrets held within, a gateway to a person’s innermost thoughts and feelings. He stood watching the storm blow over outside his window; in his heart he understood this window for just as it was storming outside, Jordan’s own storm raged within. Jordan put his hand against the window and felt the rain beat against his fingertips. The sound soon echoed in his head like a heartbeat. Slowly he began to trace a name in the window, he found himself gazing at the name, remembering its owner, and smiling. A glimmer of light that had broken through the clouds caught his attention.

“You always were my sunshine.” He said out loud to himself. He stood back and watched the name for a minute, he saw the condensation gather at the end and roll down the window. Jordan tightened his eyes “Don’t cry,” He said to himself. “It only makes it harder.”  Jordan put his hand to the window again ready to wipe the name away; he hesitated only a moment then pushed his hand over the name removing it forever. “If only it were that easy.” Jordan said pushing away a tear that had escaped his grasp. “You are so pathetic,” He said turning to the mirror behind him.  There was a man standing there reflected in the glass, a man he never really wanted to know. The anger came back to his face again as he growled “Go away,” towards the image. He looked up again and the man hadn’t gone away. If Jordan hadn’t seen that face reflected for the last eight years, he would have never recognized himself. No amount of saying ‘go away’ was going to change what he had become in those eight years. He wondered if the people at home would recognize him. His dark brown hair that he usually kept long and unruly was now short and slicked back. His eyes now much older were framed by his glasses which he found much more comfortable than his contact lenses. Everything in his life was in the right place, he had the knowledge and the look, in three months he would start his new job; and only one thing was wrong. Deep down inside, Jordan hated all of it. Some part of himself that he had buried long ago mourned his old self. Maybe going home would somehow change him back to the person he used to be.  That place had to hold that magic. It was the place he had learned to call home, that’s where she was from. She was the one who made him believed in fate; she made him believe anything was possible.  His dreams had been manipulated by the real world creeping in, and the States had reclaimed him and turned him into the person he now was. He longed for that magic in his life again.  The smile came back again, why did he always smile when he thought of her?